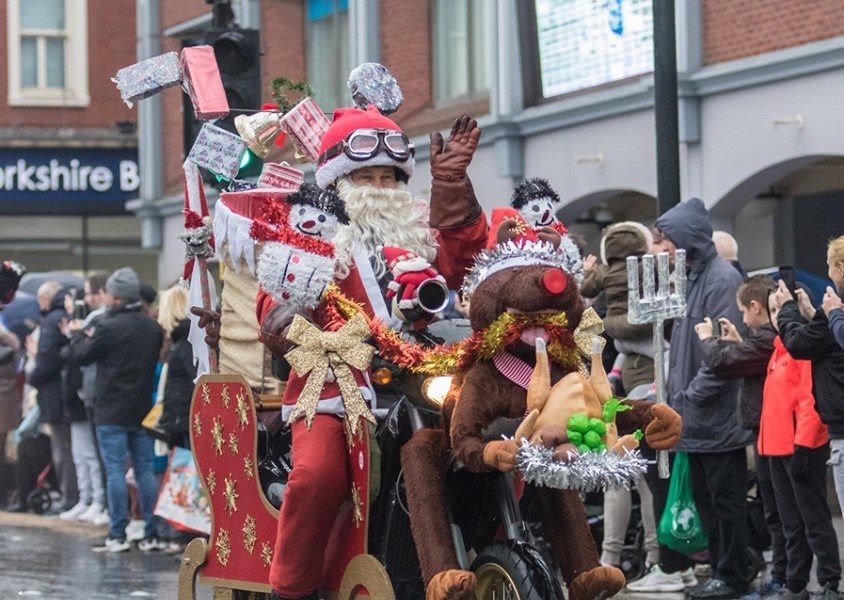 Andy Lowther,  our very own Production Engineer/Machinist  (the one in the Santa suit!), took part in the annual Boundary 500 Santa Ride in aid of Zoe’s Place, the local baby hospice located in Middlesbrough. Along with his sister, as you can see by the photo, brother in law and father who’s 85 and who had to be peeled off the pillion seat at the finish line after 2 hours of riding at slow speed waving at all the crowds along the way. The ride starts at Thornaby takes in Stockton, Middlesbrough, Redcar and finishes at Kirkleatham Hall a total of 22 long miles, however a lot of fun and smiles for everyone both taking part and watching. The event is supported by local dignitaries including the Mayors of Thornaby, Stockton, Redcar and Dame Tanni Grey-Thompson.

In December 2006, 28 brave souls turned up for our first run. All the riders and pillions had to wear a Santa Suit. The event went very well and we raised about £1600. The decision was made that the ride should become an annual event. In December 2007, 130 motorcyclists turned up for the annual ‘Santa Ride’. The suits were provided by Zoë’s Baby Hospice and were paid for by entry fees. The sight of 130 motorcyclists dressed as Santa’s has to be seen to be believed. The event is now well established and supported by local Councils and the Emergency Services with a full Police rolling road block escort.

It is expected this year that the Boundary 500 Motorcycle Club will have raised more than £750K from the annual Santa Ride a big thanks to all those people from Mowden Controls, who have contributed an excellent amount of nearly £200 towards the total.